During the last 10 years our organization Tsonami has been working around the topics of sound and city with the aim of promoting the development of critical artistic processes, using the sonic imagination as a way of addressing social, acoustic, geographical and territorial complexities of Valparaiso.

The 11th edition of the festival hosted and co-produce the Acts of Listening project in Valparaiso from 21st of November – 9th December 2017.

Read the logbook of our multiple activities here in reverse chronological order. It was already in 2007, that Tim Ingold suggested to abandon the term soundscape. Instead of using an objectified idea of ‘(land)scape’ we perceive, he proposed ‘weather’ as a model of thinking sound – as a condition within we exist rather as a phenomenon we observe from a distance.

“[…] does the tree falling in a storm make any sound if there is no creature present with ears to hear it? Does sound consist of vibrations in the medium? Or is it something we register inside our heads? Is it a phenomenon of the material world or of the mind? Is it ‘out there’ or ‘in here’? Can we dream it? It seems to me that such questions are wrongly posed, in so far as they set up a rigid division between two worlds, of mind and matter […] Sound, in my view, is neither mental nor material, but a phenomenon of experience – that is, of our immersion in, and commingling with, the world in which we find ourselves.” *

Looking back at the past 10 years and the immense growth of the field of sound studies – countless books were published, conferences held and festivals established, territories were marked and claimed. Mechanisms of knowledge production and mediation are often reproduced without questioning, of course due to limitations and latencies within institutional and formal frameworks.
Initiated by Fernando Godoy and Carsten Stabenow as a collaboration for Tsonami Festival and Tuned City – Acts of Listening was taking off exactly from these positions: sound as contextual immersive assumption and listening as a constant interaction. The group has been thinking and exploring new formats of artistic research and production, emerging from – and imbedded in – the social dynamics of the actual place but trying to develop an agency as independent as possible from institutional expectations.
The Acts of Listening group circled around Tsonami Festival (and Tuned City) like a satellite, injecting, adding, commenting, extending, blurring, questioning, and challenging the proceedings. Following ideas of Michel de Certeau’s The Practice of Everyday Life – in which city becomes a city only in the moment it is used, in the moment of ‘acting‘ within – the group tried to utilize improvisation as a meta-learning system, a way of strategic thinking which has to incorporate social latency and diverse adverse effects as feedback process in order to discover new ways of doing. The general approach was to avoid individual recipes or to fit artistic ideas into a formal context and expectations… but instead leave the protected zones and safe places, take risk, sketch and prototype ideas and directly confront the public and ourselves with their consequences.

In the context of a sound art festival – to objectify sound – carries the risk to lose touch with surrounding reality.
“We may, in practice, be anchored to the ground, but it is not sound that provides the anchor. […] the sweep of sound continually endeavours to tear listeners away, causing them to surrender to its movement. It requires an effort to stay in place. And this effort pulls against sound rather than harmonizing with it.” * A certain reading of Ingold might be very up-to-date. Listening is not pausing and contemplating, opening up to acoustic environment and letting the information in – sound is a force and we are already enclosed, we can’t distance ourselves – we’re floating within, fighting against – listening is struggle as existence.

These days we ask ourselves more often how to react to the developments in the world, reflecting the relevance of the things we do in our privileged contexts. There is an urgency to progress from ‘observing and sensing’ to ‘responding and acting’ – environmental, political, and general global crises are nothing we can objectify or remain detached from – we are in the middle of it, we have to act, refuse, develop alternatives. Otherwise the storm will blow us down like trees – and this time definitely no creature with ears will be present to hear it. Act of Listening reports from page 54 on… A performance that experiments with translation, understanding and dialogue as active forms of listening. “By listening we set ourselves into relation to one another / we spread into the peripheries and  therefore become peripherical ourselves – from inside.

Let’s consider peripherical practices, that make us aware of a zone / in which we are able to hear our voices sounding together / and perceive them in their distinctions / in which we endure and enjoy the arising dissonances / and the unpredictability of the coming moment.

A zone that inhabits but does not appropriate / that sounds and resounds but cannot be captured / a porous space , that is neither inside nor outside / like the palacio on Serrano street.” A performance in public space that reflects on geography, ways of walking, listening and thinking in the form of personal encounters. “Within the next 20 minutes you will walk down and climb up stairs, along a way that will be shown to you. In certain spots a person will speak to you and will ask you different questions. You are free to answer.
Every station is an encounter with an unknown outcome.” 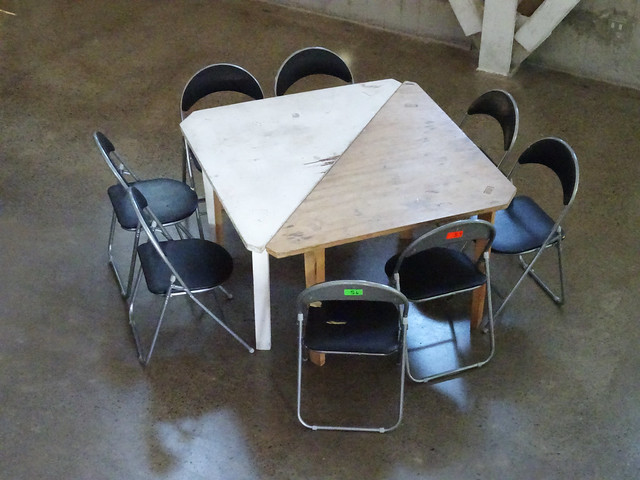 An invitation for people who are interested to participate actively in the performance „Encounters I“ at the same day at 15h.
We will prepare together parts of the performance and will get an insight into the process of „Acts of Listening“

Please register by sending a mail to: skawi@gmx.de